The electrifying cry in 1980, ‘A dingo’s got my baby’, galvanised an entire nation and Lindy Chamberlain soon became a household name in Australia.

On 17 August 1980, while on a family holiday, Lindy’s nine-and-a-half-week old daughter, Azaria Chamberlain was taken by a dingo from their tent at the Ayers Rock campground (now known as Uluru).  After two inquests and a police raid on her house, Lindy Chamberlain was tried and convicted of the murder of her baby daughter.  She was sentenced to life in prison with hard labour. While inside and outside the prison, Lindy and thousands of others fought to clear her name.

In February 1986 the missing matinee jacket was found along with several other items and after two previous appeals against Lindy’s sentence had been rejected, the Northern Territory Government remitted Lindy’s life sentence and she was immediately released from jail and announced a Royal commission.

In a fourth inquest held on 12 June 2012, Coroner Elizabeth Morris found that “The cause of Azaria’s death was as the result of being attacked and taken by a dingo.” 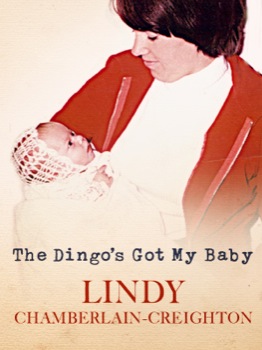 The story captured the imagination of millions around the world. Few will ever experience what Lindy has, and perhaps fewer would survive such trauma with humour and courage intact.

Lindy’s autobiography was republished in 2012 as an ebook under the new title The Dingo’s Got My Baby (previously called Through My Eyes) and in 1988 the movie of John Bryson’s book on the extraordinary Chamberlain story, Evil Angels, was released starring Meryl Streep.

An entertaining and eloquent speaker, Lindy has addressed government officials and ordinary citizens alike, in countries around the world. With powerful credibility and captivating style she reveals the truth behind the rumour and innuendo, and through it encourages and brings hope and inspiration to everyone who has the opportunity to hear her speak, or to read her book.

Lindy is an intelligent and articulate person who speaks publicly on a variety of topics including how to deal with the media and it’s responsibilities in news reporting, lawyer’s responsibilities to seek the truth and be impartial and prison life.  Lindy also speaks on divorce; grief, stress, loss and forgiveness.

On 20 December 1992 Lindy married American businessman Rick Creighton. Lindy and Rick settled in Seattle, USA for some years but now live in Australia.

There is still enormous media interest in Lindy, her life and the stories that have transpired because of that event.